Today I learned that it is hard to ride on frozen roads with snow on top.

I rode about 100 km today. Even main roads were not fully cleared of snow so there was hard packed snow turned into ice, and lots of snow. Smaller streets were fully snow covered.

It was slippery. The small car spikes on the tires did not help all that much. That meant some riding with landing gear down, i.e. with one or two boots on the ground for support.

Temperatures were around -3…-5 C. No problems with the cold, just the bike sliding around on icy roads and streets. Oh, I could not refuel in the evening on the way home as the petrol cap lock had frozen solid. It takes a long time for the engine to warm up, it is probably time to think about covering the radiator with something.

This will be an interesting winter.

The temperatures have been -3…+2 C. It snowed yesterday and snowed some more this afternoon.

This is what it looked like in the morning. The local streets were slippery but the spiked tires did not let the bike slide at all. My boot slid all over the place when I stopped to try out the surface.

This is how it was in the evening. 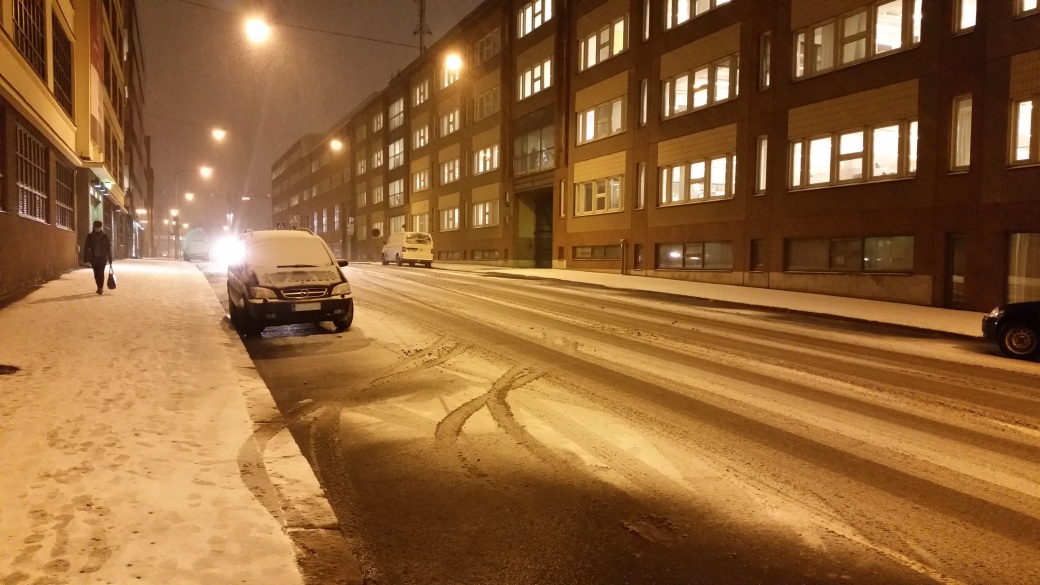 It was a bit unnerving to ride over the snow ridge between the car tire tracks, but with this little snow there was no sliding, the M+S tires worked well. It was a bit slippery starting from standing in the snow, it was as though the clutch was slipping but of course it was just the rear tire not gripping on the snow.

This is how the tracks look on virgin snow. 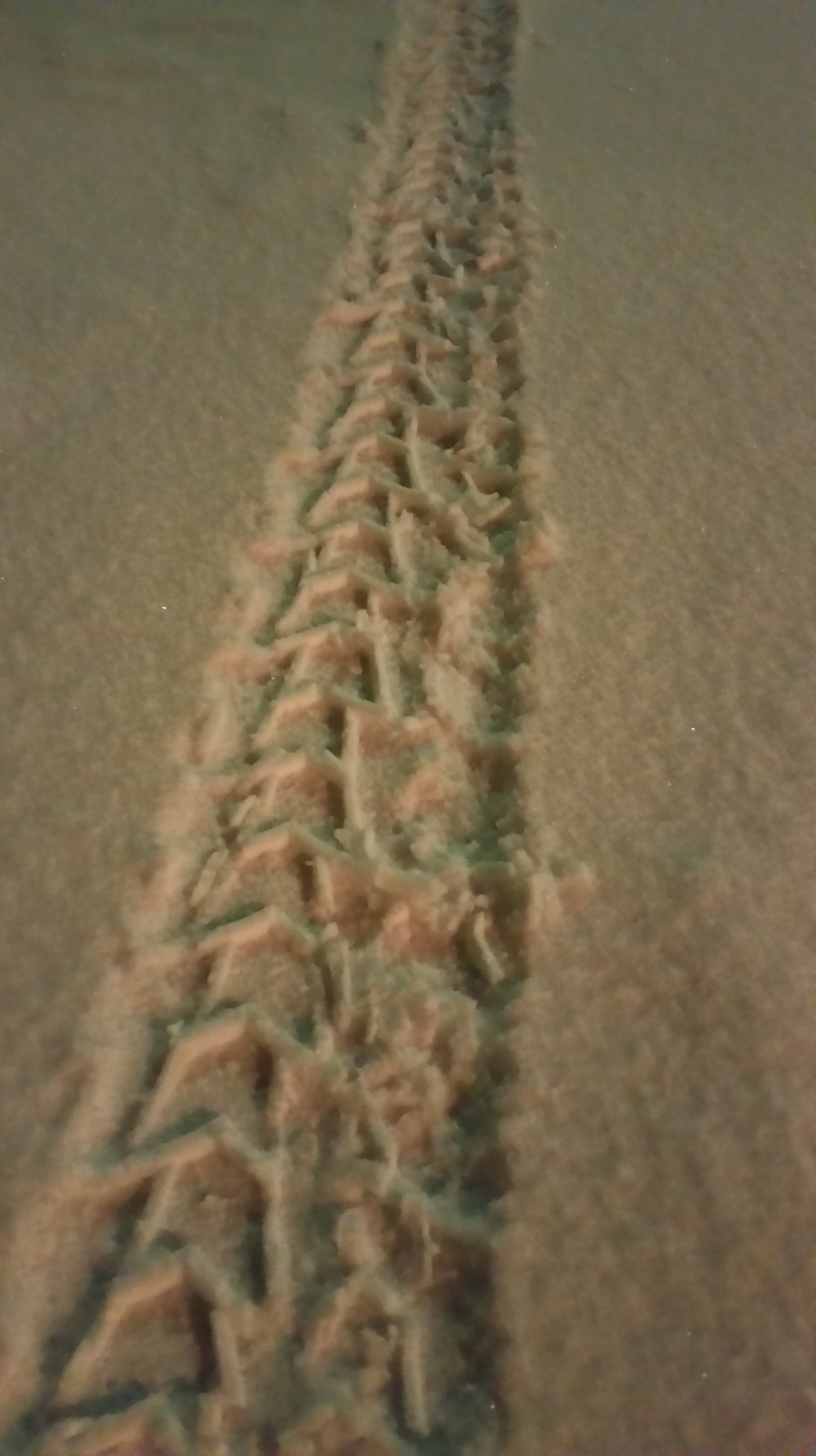 The snowmobile goggles are super! When I was standing in traffic and traffic lights, some snow stuck to the goggles but it was easy to wipe it clean with a couple of fingers. On the move the snow had no chance to stick to the lens so visibility was unhindered.

We had snowfall yesterday but the roads are already clear as the temperature is above freezing, 0…+2 C.

Riding about 100 km today gave no problems. A few kilometers were on local roads that still had a thin layer of snow on them and riding on that was very easy, no sliding at all.

This was a good occasion to test the motocross helmet and snowmobile goggles combination. It worked very well, no fogging at all. At these zero temperatures the face did not freeze at all, even at 90 km/h (the maximum speed I do to spare the spikes on the tires). I will continue using this helmet and goggles combo. 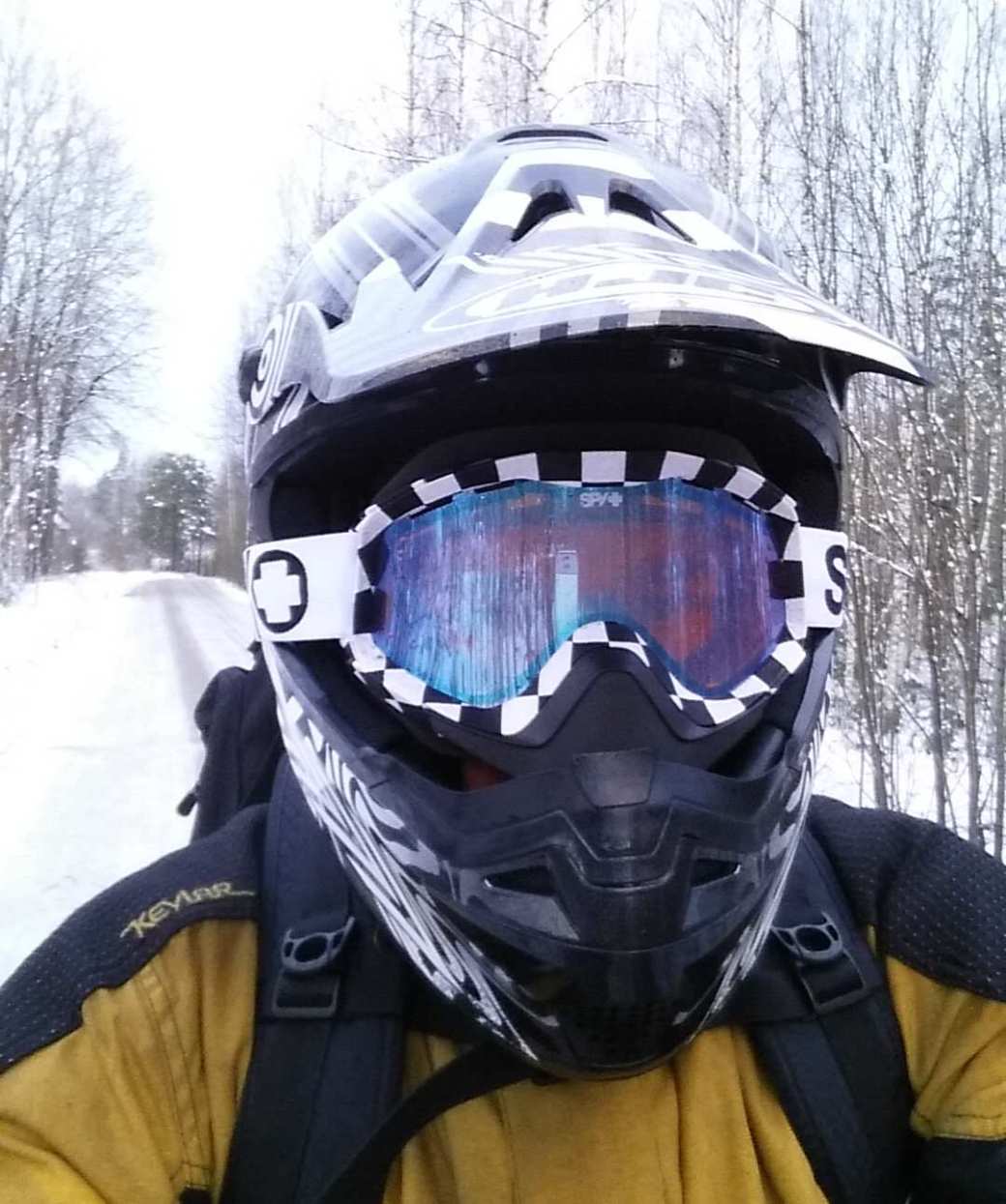 The bike is dirty as I have not had time to clean it for three days.

The morning welcomed us with wet snow. An hour of work to clear the snow.

Now to find some time to ride on that snow, unfortunately it is a busy Saturday. Let us hope the snow will stay at least for a few days so I could have a good chance to test the Sava M+S tires.

No snow coming for at least a week so no new winter experiences yet.

The temperatures are 0…+4 C and rain almost every day. The only challenge is poor visibility in the winter darkness with constant rain drops on the visor.

I received the engine crash bars, made by Fehling. I have not installed the bars yet.

I noticed the bars do not attach directly to the frame tubes but rather with metal bars and a clamp. This is most probably done so the bars and the clamp would bend on impact and save the bike frame from excessive twisting forces.

I keep washing the bike after every ride to keep road salt from eating the finish.

I have changed my commute from motorway to a local road to keep the speed well below 100 km/h, to spare the spikes on the tires. I read that at least some spikes overheat and then wear down quickly – I do not know if these spikes are vulnerable but better safe than sorry. And naturally I keep acceleration down to conserve the spikes.

While waiting for the snow to fall I found this French video of riding in snow, in Lapland. They do it on street bikes, but with serious spikes on the tires.

It was 0…+1 C in the morning and I had my first ride on icy streets.

The streets close to my home had really slippery ice in the intersections. I stopped and checked with my boot. Very slippery. The spikes on the bike worked very well, the tires did not slide at all, even when braking to a stop. Main roads and city streets did not have ice.

The road back in the evening was easier, temperature was still low at 0…+1 C, but there was no ice left.

After the bike had cooled I rinsed it with a hose to remove salt, if any.

I shopped for motorcycle oils today and decided to use 5W-40 oil, to protect the engine on cold starts. I expect lowest temperatures to be down to -20…-30 C.

This is getting stressful. I am all set up for winter adventures but there is no snow!

I am now used to the strange turning behavior caused by the flat profiled rear tire. Next winter I will try Heidenau K66 and K73 tires, they seem to be M+S tires in correct size for my bike. Just add spikes… Thank you, shyhander, for the advice.

I found a winter riding thread on a domestic bike forum. There is so much to learn and prepare. What type of spikes for which type of riding, heated visor, winter grade engine and lubrication oils etc.

My first attempt against the visor fogging up in the cold will be a motocross helmet with separate goggles, but it is good to know that there are heated visors available and they seem to solve that problem.

At the gas station today I saw another bike although the season has already closed because of subfreezing temperatures.

When I came back from the cashier I saw the other rider looking at my new winter tires. We had a quick chat, he shared some information on where to get winter tires.

He was riding a 1930s Harley Davidson. He had off road style spiked tires on his bike. He told me he rides the bike every winter – “These 1930s bikes are made for the winter”. Then he kick started the motorcycle and roared off into the darkness. Oh yeah!

I am sorry for not taking a photo.

The spiked tires and heated grips have been fitted.

This is how the Sava Mc32 tires look on the bike.

And the heated grips controller is here.

It was around -4 C when I rode the bike home from the shop. The grip heater was fine in positions 1, 2 and 3. Even the lowest position 1 gave enough heat to keep my fingers warm on a 30 minute ride.

The rear tire is a 130 wide whereas the factory tire was 160. Because of the wide rim the rear tire’s profile is flattened. This causes funny handling. When I turn the bike, it starts to tilt over, then hesitates and when I continue counter steering it suddenly drops into the turn again. It must be the front tire turning normally to the side but the flat profiled rear tire resisting until it has been canted enough to get on the round side section. It will take some getting used to this two phased steering effect.

Here the bike is at home, beside the summer ride, 2002 Honda Fireblade.