The winter weather is over. It is time to do a preliminary Spring Inventory.

I did not drop the bike, that is a big win.

Some minor problems were caused by the snow, salt on the roads and cold temperatures:

On the plus side:

As to summer plans… I have ordered Heidenau K73 supermoto tires for the bike so I can use it on dirt roads, to do some backwoods exploring with my wife. The brake calipers will be rebuilt and new brake pads installed. An oil and filter change, of course. The mechanic will oil the clutch cable.

My apologies for the long pause in posting. I was away on a vacation trip, rented a Kawasaki Vulcan 800 there for a couple of days, not a bad bike for some holiday cruising. After the vacation the winter weather was practically gone already at home so riding was not so exotic anymore.

I will post pictures of the bike before and after washing in a few days. The bike looks terrible now, even though I have washed it often. The black paint on the cylinder cooling fins has started to flake. Aluminum parts have stains on them and I do not know if they will polish off eventually or not. The lesson is: do not ride a nice and expensive bike in the winter, buy a beater bike for that.

A routine ride today to work and back. The morning weather was dry with temperatures around 0 C. On the ride back the temperature was the same but we had a light snowfall.

I changed the headlight bulb in the morning, replaced the broken bulb with one rated at “+100%” brightness. The difference is noticeable. The next bulb to change is the high beam because currently the high beam is very lousy.

The last couple of weeks I have ridden the bicycle. The colleagues set up a team on a site where they calculate the average kilometers ridden – I need to ride the bicycle to stay with the team mates.

The Fazer has lost the headlight. I have a new lamp ready but have not installed it yet. Otherwise no news on the motorcycle front. Temperatures have been -2…-9 C, roads and streets practically snow free.

We had several inches of snow last night and temperatures 0…+2 C during the day. I rode the bike to work. Smaller streets were difficult to ride as there was packed, uneven snow that kept throwing the bike around. I had little confidence so rode the difficult parts with boots down. Roads were easy, there was snow but the tire tracks were worn down to asphalt. 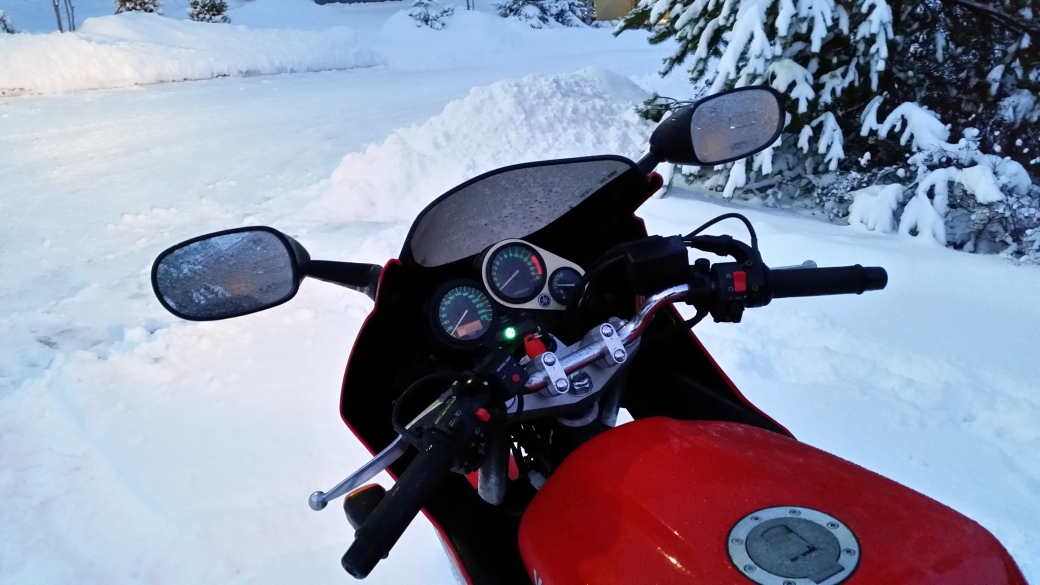 Bike parked for the day

A photo from this morning. Temperature -2 C in the morning, became +2 C in the evening. 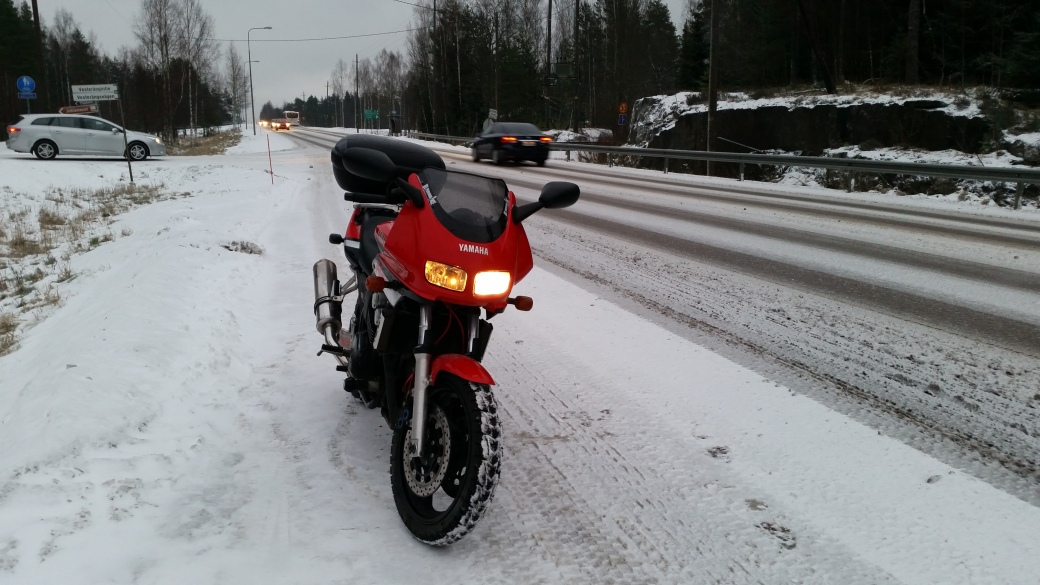 The front brake has lost its bite, maybe it is in need of an overhaul because of the salty crud. Need to investigate that.

A finger or two have frozen a little bit, and the face freezes under the motocross helmet. Otherwise no adverse effects on the rider.

The bike has caused some worries, though. The ignition lock and gas tank lock have frozen several times in spite of judicious oiling and I have had to use a hair dryer to warm them up.

After washing the bike the rear brake froze, I had to warm that up too to make the rear wheel rotate.

The sidestand switch did not want to work so that the engine cut off as I put the bike in gear. I pumped the sidestand with my hand for awhile, that freed the switch and I could ride off.

There is slippery ice in intersections on small streets.

The freezing winter days are as beautiful to ride as I expected. Fresh air, nice views. I like this!

More than a week since the last wash. The salty, gritty winter roads and streets are taking their toll. I washed the bike quickly (read: for more than an hour) under a light snow fall, the temperature being around +2 C.

Here are some before and after photos. I made the mistake of trying a brass brush on the header pipes to dislodge the baked dirt and scratched the paint in the process – stainless headers added to the wish list. 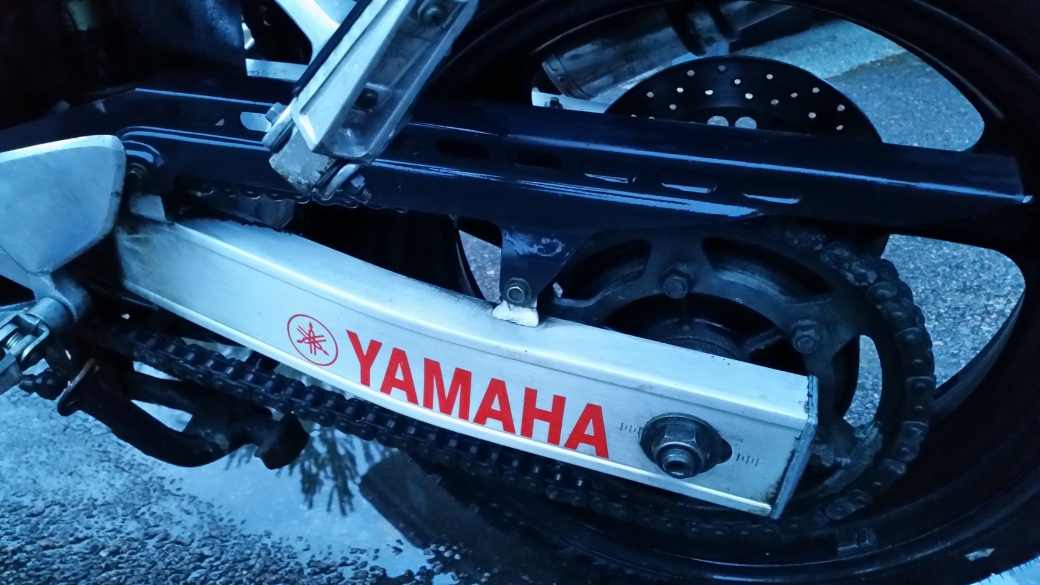 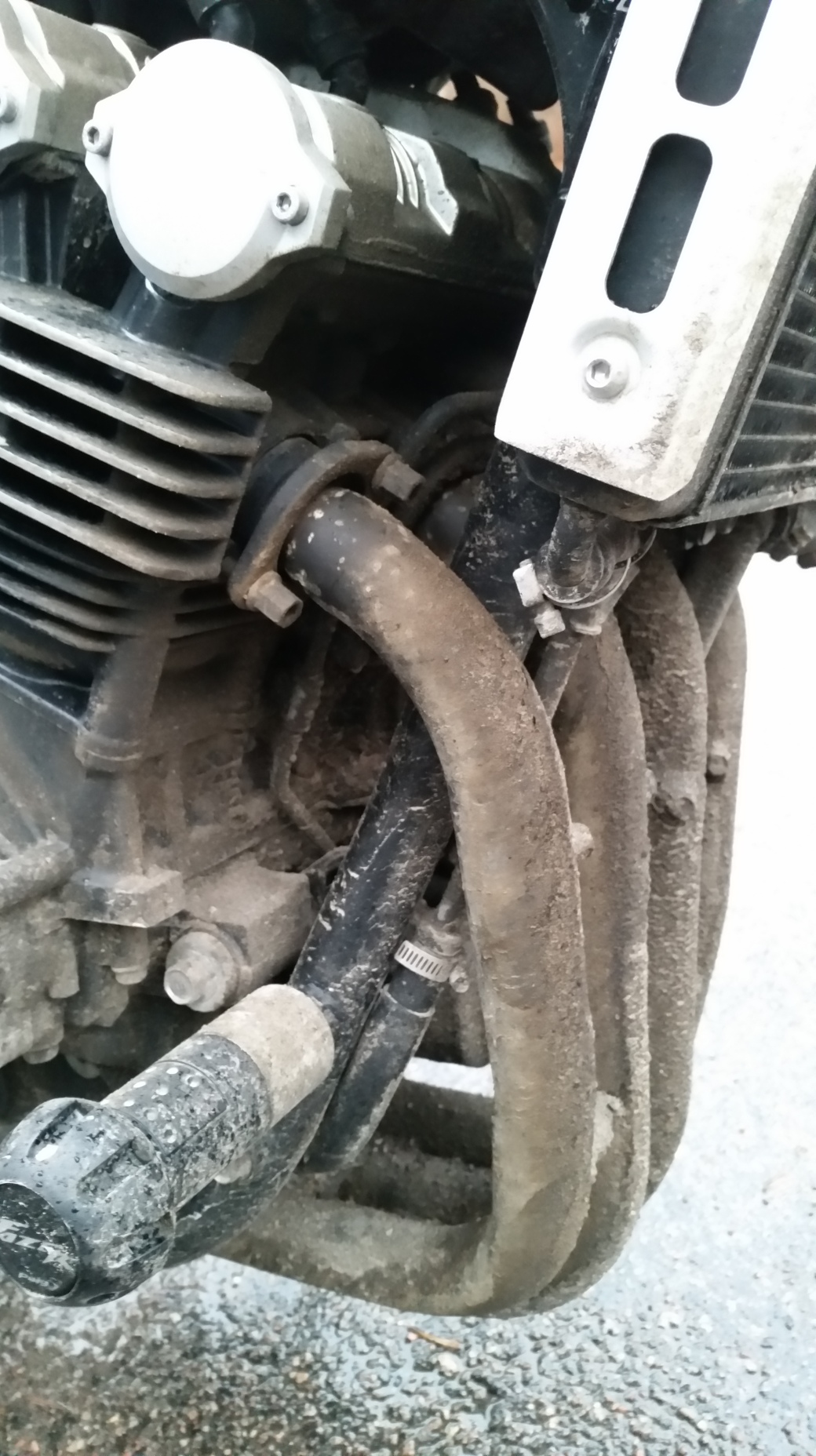 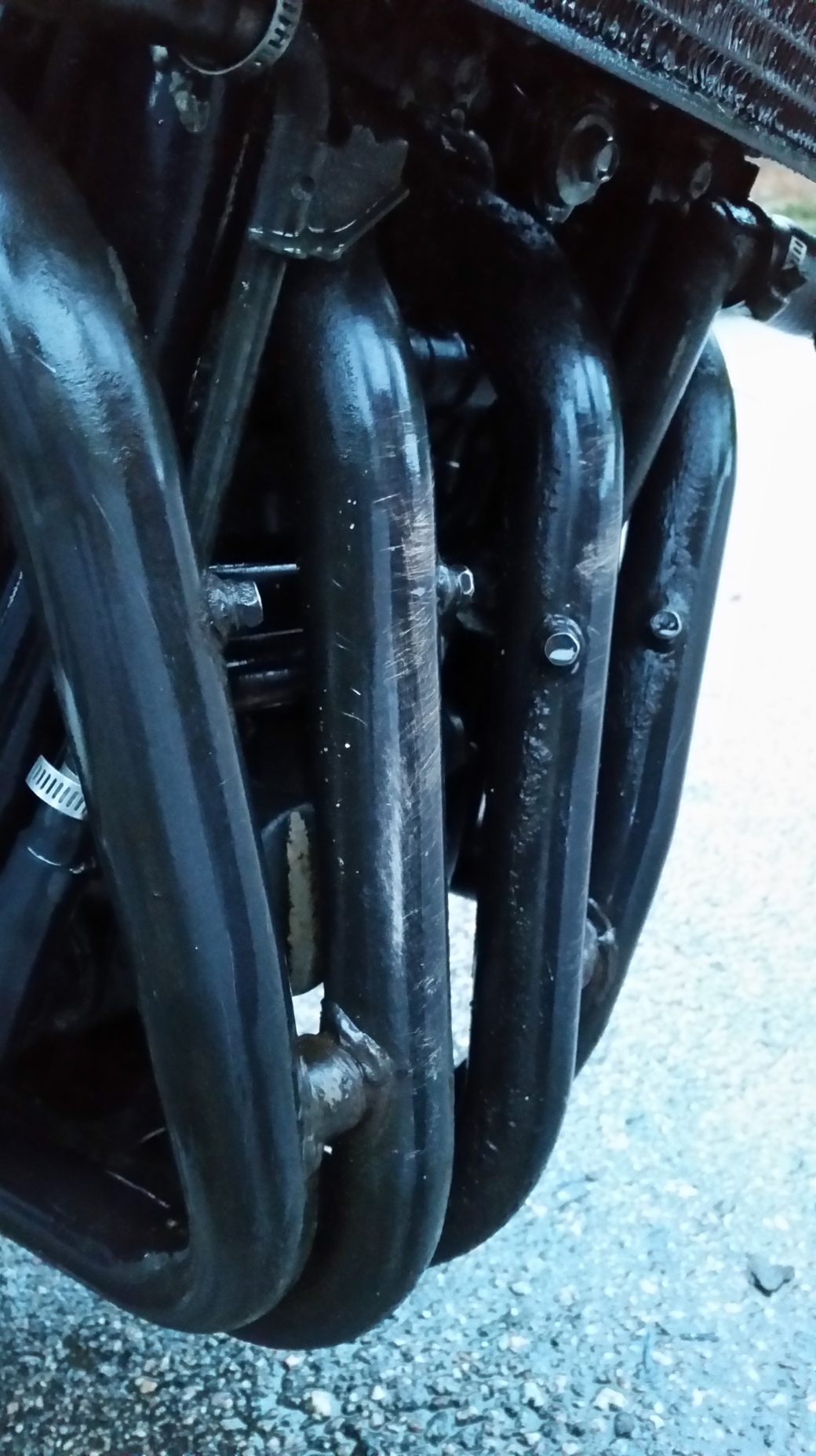 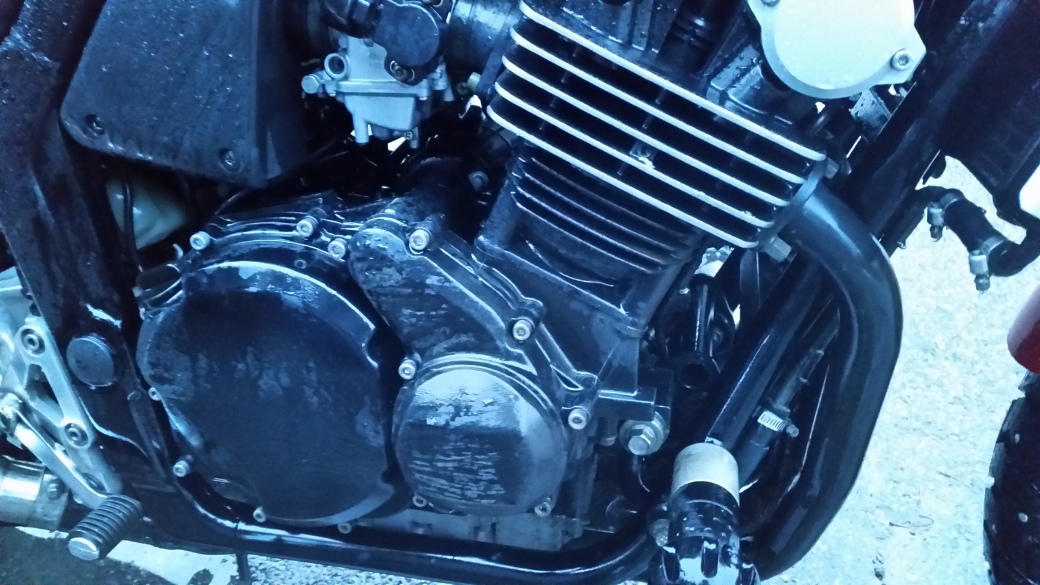 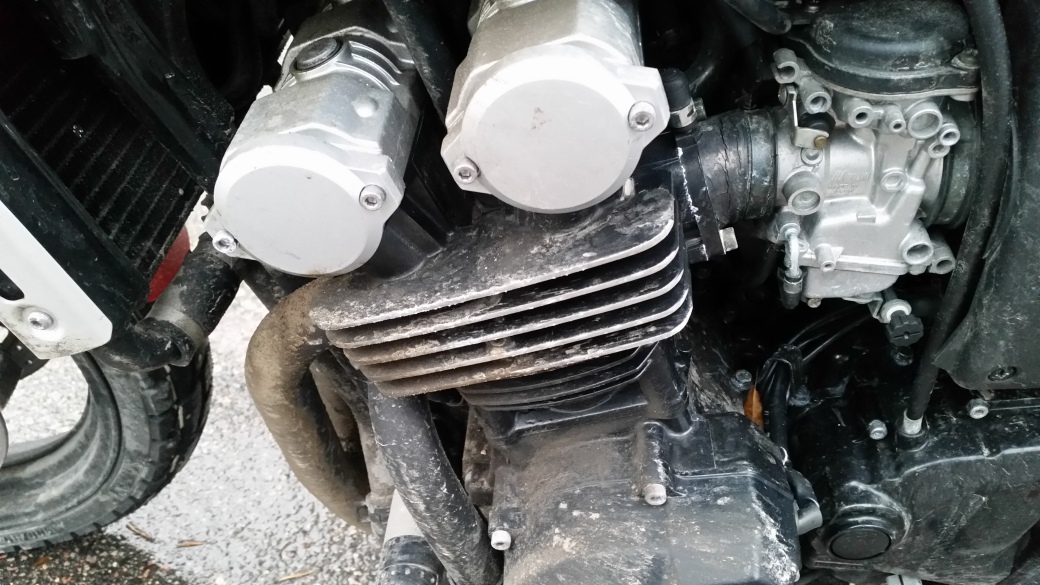 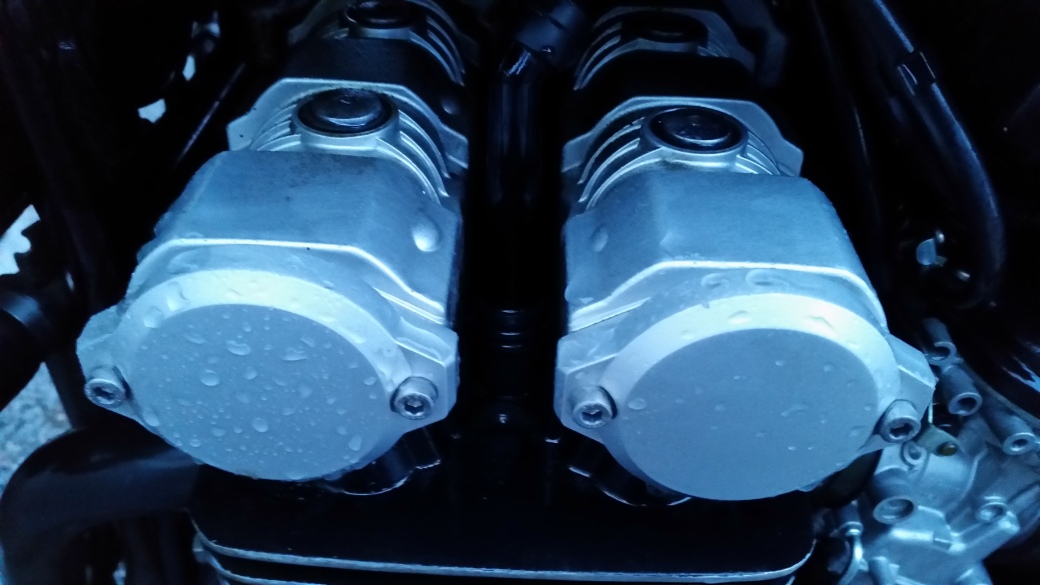 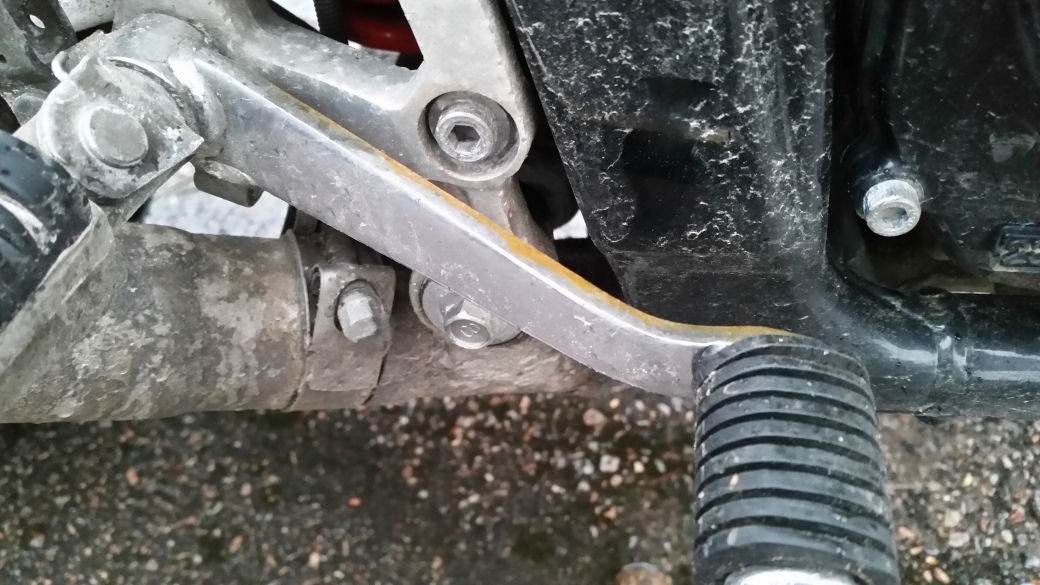 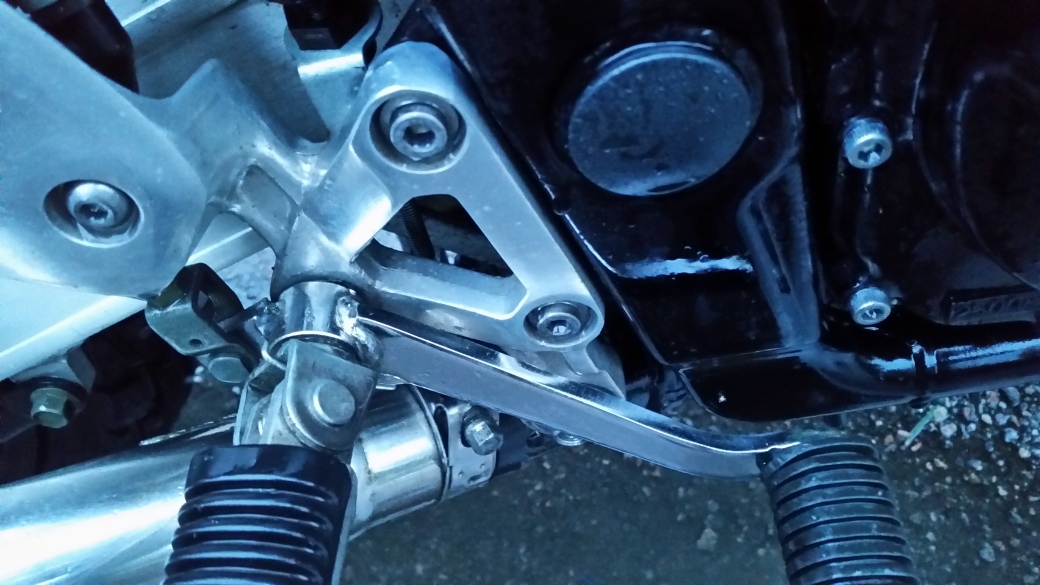 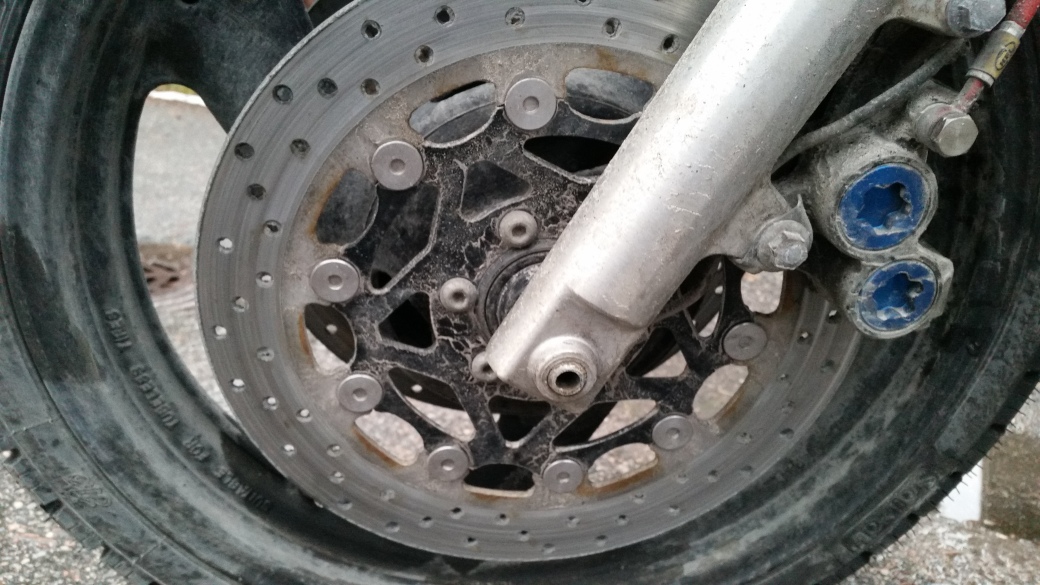 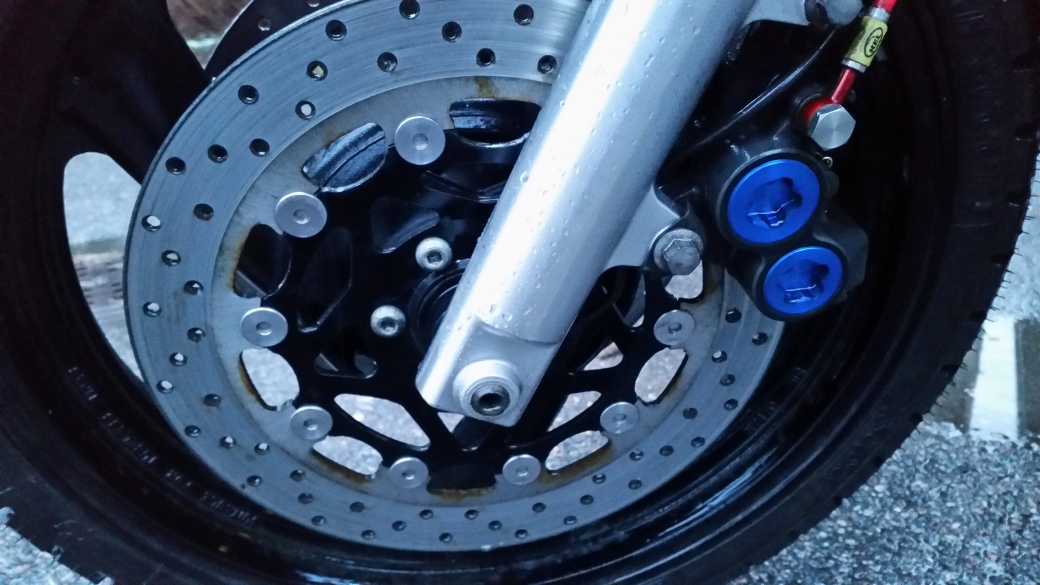 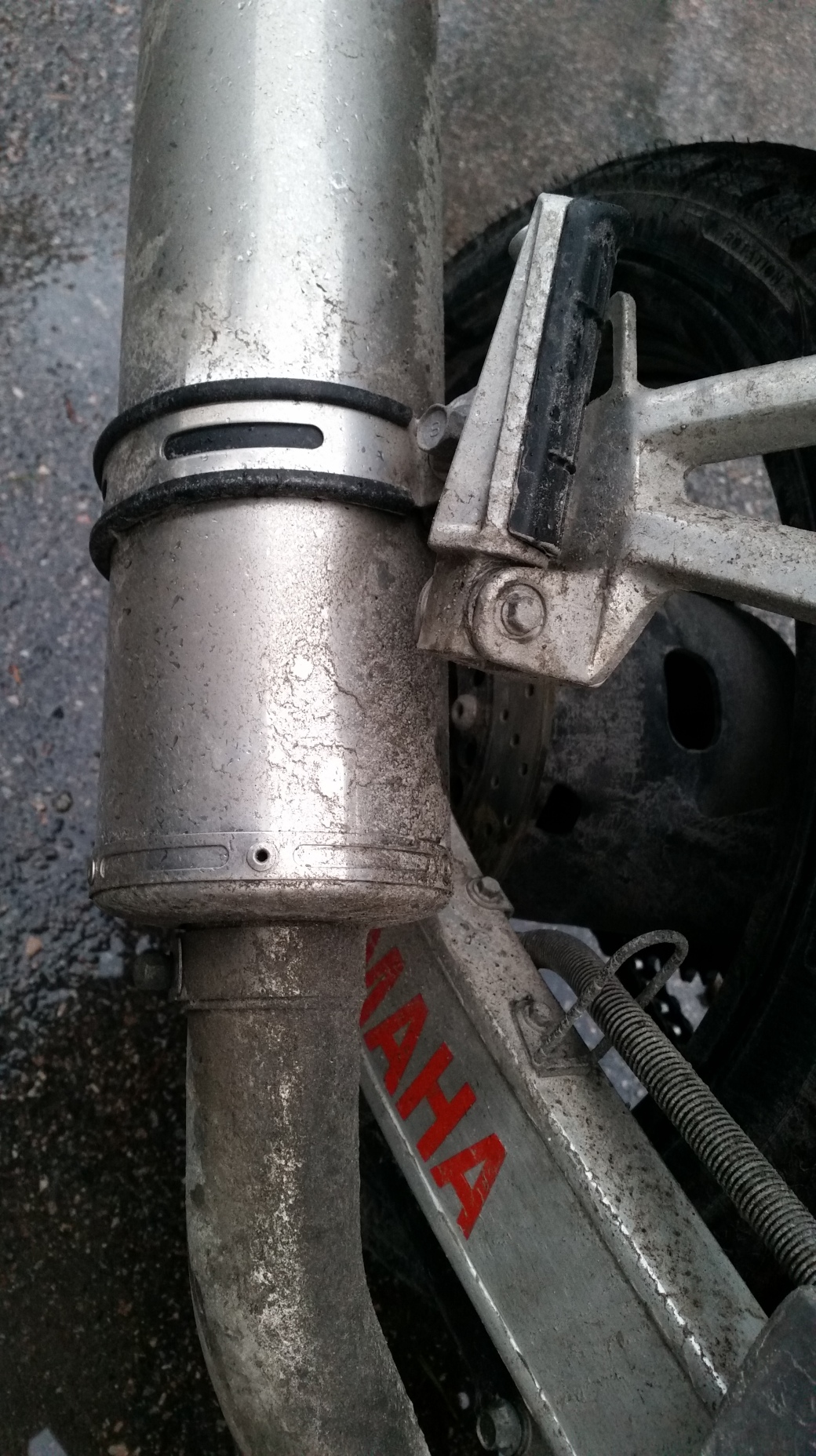 Yesterday morning we had ice and water on the front yard and the street by the house. Optimistically I warmed up the motorcycle and carefully rode over the icy front yard. The tires were slipping regardless of spikes and the boots slid freely. 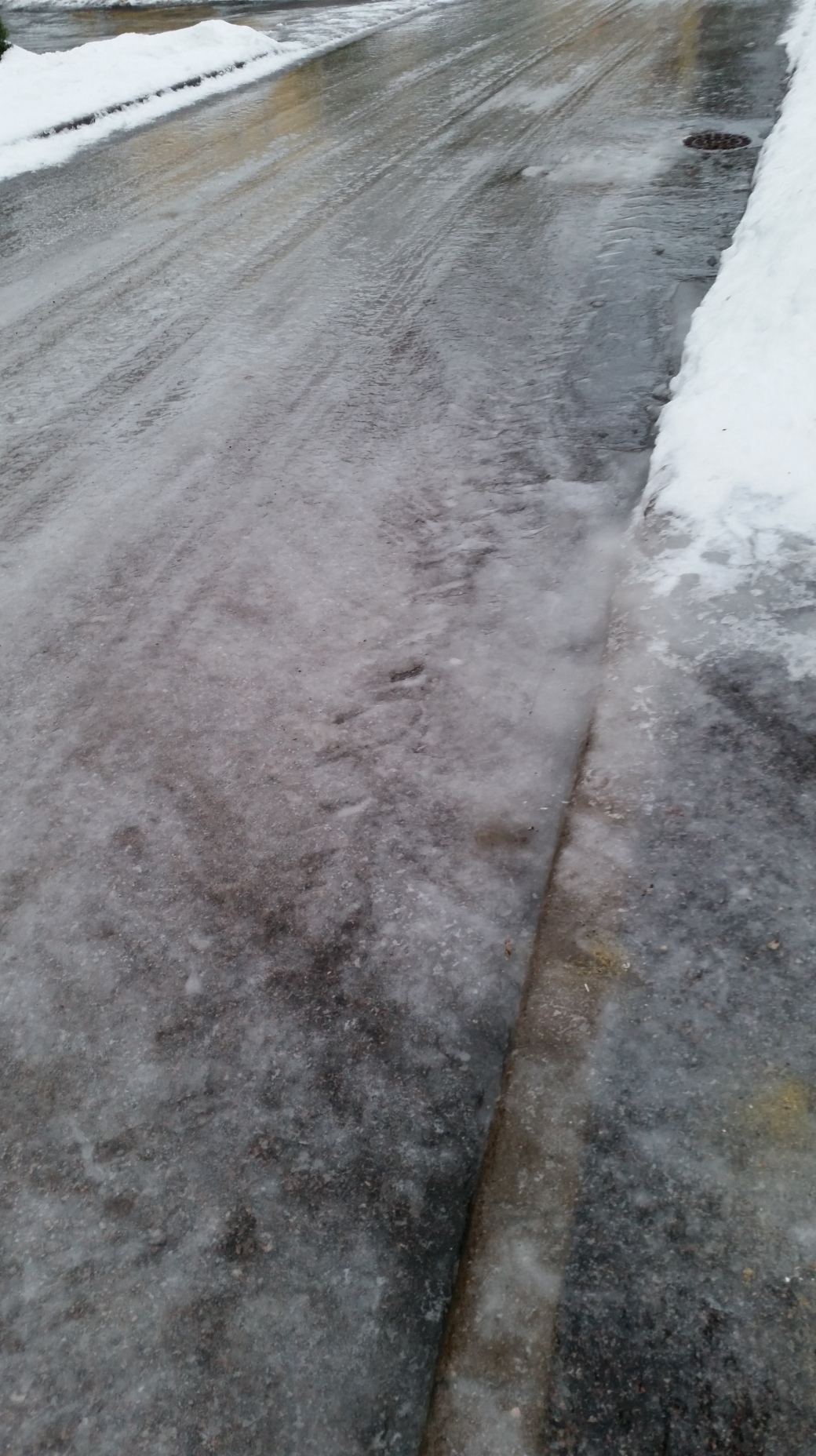 Fortunately the family was home so I called my wife and asked here to come out and help me. She could not help push or pull the bike back over the kerb because she was sliding all over the place, too. I remembered we had a bucket with pieces of broken cement left after some repair work in the house. She fetched the bucket and spread some cement dust under my feet. I finally managed to pull the bike back to the front yard and then maneuvered it back to its parking spot. Phew!

So no bike ride that morning, had to take the car to get to work.

Here are some photos of the ice covering the yard and the street. If the street were level I would have ridden gingerly but we have a steep hill down to the next street, there would have been no way to brake. I was not up to the challenge. More serious spikes are on the wish list now. 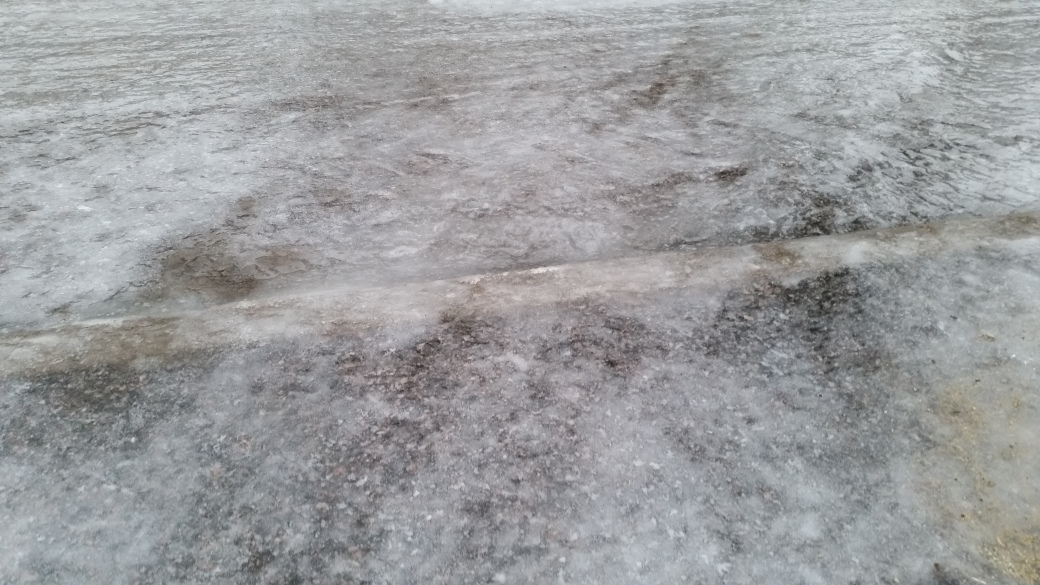 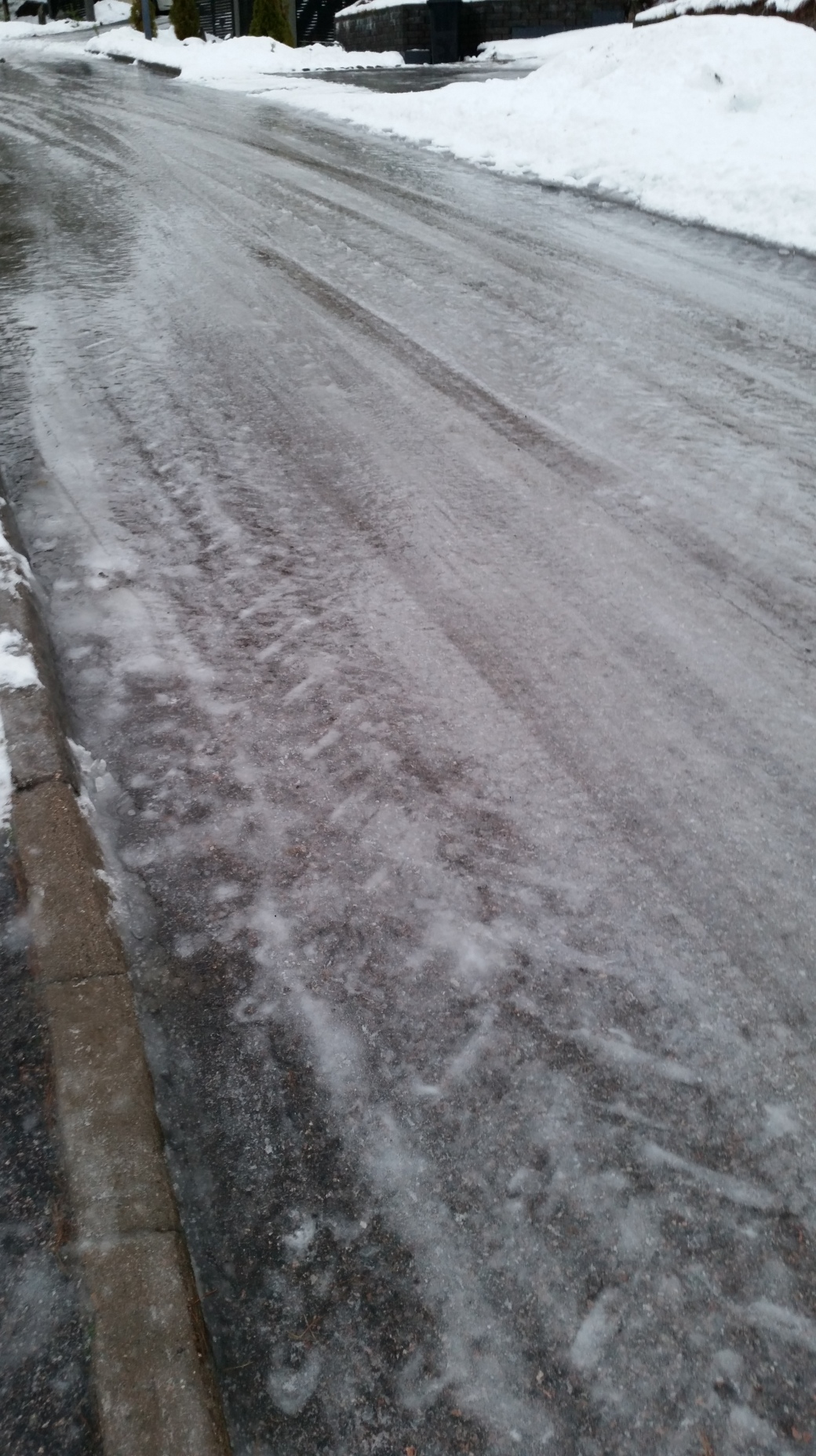 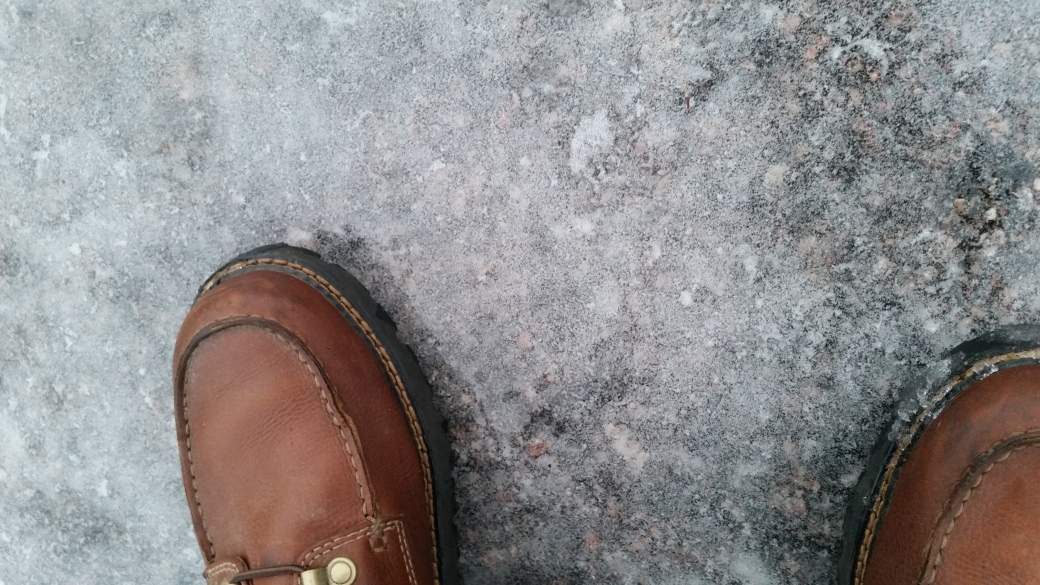 It was -17 C this morning so I decided to spare the Yamaha from a cold start and rode my mountain bike to work, 30 km each way.

These freezing winter mornings are beautiful.

The bike was built on a cheap Giant 26″ frame mainly with XT parts. An excellent commuter.

The huge spiked tires are a real drag, I lose almost half of my speed compared to summer tires, and the compacted snow does not help either. 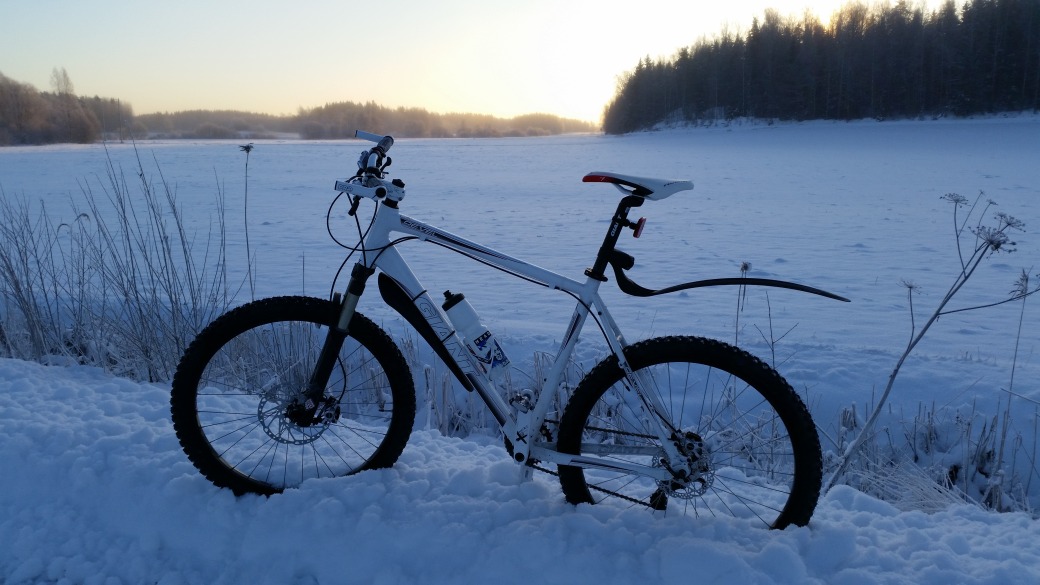 While surfing for Christmas presents I ran into these interesting boots.

John Deere 12″ Miner’s Lace-Up Boots. Steel toe guard, steel sole plate for protection against punctures, 400 gram Thinsulate for warmth, waterproof leather. Should be good for motorcycling, especially in the winter. A pair of these is on the way…

EDIT: Ruby Racing from Fazer Owners Club Forum warned that a steel toe cap could bend in a crash and cut off the foot. Ouch! Maybe not such a good idea to wear a steel capped boot on a motorbike after all.

EDIT2: MythBusters have tested steel toes, but not in the way that could happen in a motorcycle accident. MythBusters Steel Toe Cap Amputation Wikipedia I think I will wear the steel toe boots, as it is hard to imagine such twisting forces on the foot that the cap would turn onto the foot – I think the ankle would give in before the boot flexes that much.